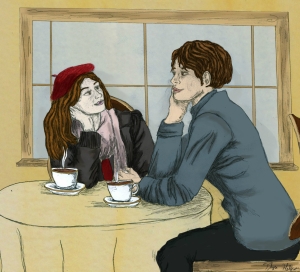 The cafés in Paris are an institution. It’s not so much about the coffee (even though many French people drink a lot of coffee) as it is about being a place to meet. A Parisian café is rarely empty, regardless of the time of day, the neighborhood, or the weather. The café is a pleasurable way of sitting unbothered for hours on end with a book, with friends, or just watching all sorts of people coming and going.

In summer, people sit at tables outside the café enjoying the sun and views of Paris: its street life of passers-by, cars and buses; its spectacular monuments, grand avenues and cobble stone streets. Even in winter we sit outdoors, whether it’s raining or snowing, at cafés where there are heaters for warmth and awnings for protection. Parisian cafés have been around for centuries and carry on an essential role in the social life in Paris. The oldest, Café Procope, on rue de l’Ancienne Comédie in Paris’ 6th arrondissement, has been in operation since 1686. Café de la Paix, Les Deux Magots, Le Café de Flore, Le Fouquet’s, Le Deauville; and nouveau cafés: Café Beaubourg in the Centre Georges Pompidou and Drugstore Publicis on avenue des Champs-Élysées.

Parisians hurry to a neighborhood café early in the morning to drink a coffee, often standing or sitting at the bar, to be in good form before work. Throughout the morning people sit inside or outdoors drinking their espresso, eating a croissant, and reading Le Monde or other newspaper. Depending on the quartier you are in, an espresso costs between 3 and 4 Euro; a little more, if you are in a chic or touristic neighborhood. Parisian cafés are not “coffee shops.” Many have a complete kitchen and menu offering meals for any time of the day plus a selection of wines.

Most cafés are brasseries, where people come for a meal or for a snack—eating a snack in a café-brasserie is a real manifestation of Parisian life! The atmosphere of the brasseries is so Parisian. In France, meals are important. Typical menu items include croque-monsieur, a grilled ham and cheese sandwich originating in French cafés and bars as a quick snack, croque-madame, served with a fried or poached egg on top, and quiche Lorraine: an open-faced pastry crust with a savory filling of custard, smoked bacon and cheese. Croque-monsieur with a salad is my favorite because it is a dish I never prepare at home, or Tartare de Boeuf with frites, which, when well-prepared, is delicious. One typically French menu item is Café Gourmand, somewhere between a dessert and a coffee that you will find in most restaurants. It is a cup of coffee and three or four assortments of sweets: a chocolat bar, macaron, Madeleine, or a crème brûlée, often ordered as a dessert instead of waiting for dessert followed by coffee. I always find a wonderful brasserie on my walks through Paris.

Cafés are usually overcrowded for afternoon tea, when it becomes a place to meet friends, network with colleagues, rendezvous, or relax and take a break with a coffee or hot chocolate. Tables are close to each other and you might easily hear the conversations of people around you. One day, I was in a café and a woman who was probably in her 80s was sitting next to me quietly drinking her coffee. She was graceful, very delicate and wore a silk scarf with a pearl necklace and red lipstick. Aristocratic. I imagined she came from a wealthy part of Paris and lived in a large Haussmann apartment. A man arrived and sat at the table next to her. He was maybe 50 years old: simpler in dress and athletic. In one hand he carried a motorcycle helmet and in the other a black leather briefcase. A businessman. I do not remember how they began to talk, but it was clear that they did not know each other, but when they left it was as if they had known each other for a long time. Over coffee, the woman talked to him about her parents during the Second World War, when she was a child. The woman had a sweet voice and was pleasant to listen to. We could understand through her voice that she was affected, but she did not cry. Gradually, they talked about society and real life. Their conversation was very friendly. After a while the man prepared to leave, probably to return to work. The woman said a little more and then it was she who left the café. I had the impression of being in another world, then coming back to reality; like watching a movie at the cinema, but real. This is what I like about Parisian cafés. It depends upon the people who are sitting next to me, of course, but something insignificant can cause the beginning of a conversation.

There are many cafés in Paris—some so famous and popular that it can be difficult to get a table indoors or out. In neighborhoods where you find more tourists, you’ll also find more cafés—maybe dozens on the same street. Most everywhere in Paris, if you are in the right café at the right time, you can see a famous artist or celebrity, which is nothing new. Some celebrities prefer to be discreet, still others want to be seen—and when they want to show off they know exactly where to be seen and where to be seated. Certain cafés are perfect for that.

Le Café de Flore is one of these celebrated cafés. It is one of the oldest and most prestigious in Paris where you can meet or observe its famous clientele among the Parisians, tourists and waiters dressed in their black and white uniforms as if they were still in the 1920s. Café de Flore is ideally located in the quartier of Saint-Germain-des-Prés, one of the most intellectual and artistic arrondissements of Paris. During and after the war, the artists and writers who went there, in part, built the reputation of the café. One couple that marked its history is Jean-Paul Sartre, French existentialist philosopher, novelist and literary critic, and French writer and prominent feminist theorist Simone de Beauvoir. Other artists and intellectuals include French poet Louis Aragon; the Spanish artist Pablo Picasso; Serge Reggiani, the Italian-born French singer and actor; and French stage actor, director and playwright of the Boulevard theatre, Sacha Guitry. Of course, many famous Americans, when they were in Paris, sat in the café, such as author and journalist Ernest Hemingway and author Truman Capote.

Stopping for a coffee, hot chocolate or snack at Café de Flore in the afternoon always puts me in a good mood. The ambiance, the food, the drink… To me, Café de Flore is almost mythical, legendary—a real institution. Some lesser-known cafés are wonderful in their own way, and some famous cafés are not. What’s important is to find a café that corresponds to you. Where you feel good. In Paris, you’ll find one.

Flor der Agopian was born in Clamart, a southwest suburb of Paris, where she grew up and lives today. She is in the final years of terminale, which is equivalent to the senior year of high school in the U.S., where she is preparing for her Baccalauréat at the Lycée Françoise Rabelais de Meudon. If accepted into the language program, Flore will study history, literature, and the culture of anglophone societies and will hopefully study abroad in the U.S. or Germany.

You may also enjoy A Woman’s Paris® post, French Impressions: John Baxter’s “The Perfect Meal” and Finding the Foregone Flavors of France. In this delightful culinary travel memoir, John Baxter follows up his bestselling The Most Beautiful Walk in the World by taking readers on the hunt for some of the most delicious and bizarre endangered foods of France.

French Apéritif: Cocktails in Paris, by Barbara Redmond who writes about the sublime experience of cocktails at six-thirty or seven o’clock in Paris and the journey into a slower paced world of genteel manners and day-to-evening transformations. Cocktails: Fashions from the 1930s to the 1960s—Chanel’s “Little Black Dress” and Dior’s “The New Look.” Including a recipe for the French aperitif “French Kiss” by Pernod.

Le soufflé – l’amour, la romance and ladies who lunch, by Barbara Redmond who invites us to join the “ladies lunch,” with French food specialist Deborah Lee Johnson (founder of French for A While) and Kathy Morton (a Certified French Specialist, retired professor, co-recipient of the Julia Child Endowment Fund Scholarship, and also current designer of culinary tours for Tour de Forks). The soufflés, wine, and champagne were enjoyed at La Cigale Récamier, a restaurant located on a tiny pedestrian street in the seventh arrondissement in Paris. Recipe included for Soufflé au Chocolat (Chocolate Soufflé), by Georgia Downard from Evie Righter’s book, The Best of France: A Cookbook.

A Parisienne’s Guide to the City of Love on Valentine’s Day, by Frenchwoman Flore der Agopian who writes about the French love of chocolates—always the most appreciated gesture, as many of the greatest chocolatiers are found on the streets of Paris. Including chocoalte specialities you’ll love and where to find them, and Flore’s family recipe for chocolate cake. (French)

Boulangerie Poilâne: A toast to French Breads, by Barbara Redmond who shares her face-to-face encounter with a French baker during her visit to the 18th century ovens of Poilâne in Paris. Could she steal a pinch from the raw, soft-white boule in its proofing basket resting close by? The penetrating aromas of bread; strong, yeasty, and hot… Recipes included for Tartine Chocolat et Poivre (tartine of melted chocolate and black pepper) and La tartine For’bon (tartine of cheeses and ham) from Boulangerie Poilâne.

2 thoughts on “Café Culture in Paris”