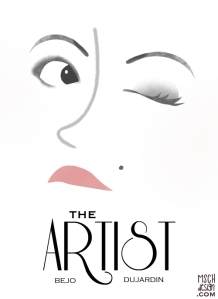 “The Artist,” by Michelle Schwartzbauer

(French) Want to curl up on the couch while the temperature drops outside? Here are three films, and what they meant to a French girl, from the list published earlier this week on A Woman’s Paris.

The first two, La Gloire de mon Père and Le Château de ma Mère are (not exact) movie versions of books by Marcel Pagnol (recalling his childhood) in the South of France. Actually, they remind me of my own childhood. I remember that my neighbors had the part I and we had the part II. Both will be forever linked to movie nights with the neighbors on weekends or Tuesday nights (we did not have school on Wednesdays) when we could stay up later!

The third film is L’auberge espagnole, telling the story of Xavier, a French student in economics who is told to go study for a year in Barcelona through the European program Erasmus. The program allows students enrolled in European universities or schools to study for a semester or two at a partner university abroad — I went to Berlin for a year. L’auberge espagnole was hugely successful and propelled Barcelona to be the “it-destination” for Erasmus students. This movie provides much insight on student life in Europe — it has become a real classic! L’Auberge espagnole also has a sequel entitled Les Poupées Russes in which we meet the characters again in their “adult” lives. The filming of the third installment is now complete: Casse-tête chinois takes place in New York!

Bénédicte Mahé has studied abroad many times, speaks four languages (French, English, German and Italian), and earned a Master of Management of cultural goods and activities, as well as a Master’s degree in intercultural communications and cooperation. She wishes to work in philanthropy for cultural institutions or non-profit organizations. Among her interests are drinking tea, cooking (with or without success), reading, watching TV shows, and — of course — shopping. She started her blog Tribulations Bretonnes in 2010 and has been updating it (more or less regularly) since then.

You may also enjoy A Woman’s Paris® post, 86 Classic French films to watch again and again. French woman Bénédicte Mahé believes that to better understand French pop culture and French people you may meet, you need to have some notion of cinematographic culture. She shares with us important French films (mainly from the 1990s and 2000s) that will help you accomplish just that. (French)

Tom Hooper’s “Les Miserables,” is big, breathtaking… bland? Film critic David Lundin gives us a view, behind the scenes, of the making of this 2012 Hollywood movie-musical, Les Miserables, based on Victor Hugo’s novel of the same name published in 1862. Les Miserables is an operatic tale of a man’s struggle to find peace against the backdrop of a growing people’s revolution and weaves the stories of a dozen or so primary and secondary characters.

French Impressions: Bénédicte Mahé living as a French woman in France. Bénédicte Mahé, student and intern who was born in Rennes now living in Paris, writes about France and women and the importance of living abroad.

My suitable place in Paris, and how I discovered my new arrondissement, by Frenchwoman Bénédicte Mahé who writes about her new apartment in Paris and her new neighborhood; a foreign place waiting to be discovered.