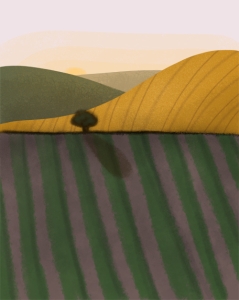 The Charente, a ‘département’ in the southwest of France, has a lot to offer the visitor. The countryside is covered with rolling hills, vineyards, and vast fields of sunflowers, through which flows the gentle River Charente, past Angoulême, through Cognac, and down to the sea. Its picturesque small towns and villages are numerous, such as Verneuil sur Charente, Nanteuil, Tusson, Saint-Groux, or Aubeterre sur Dronne, in the south. The Charente has fairytale castles dotted here and there, Romanesque churches, and prehistoric sites. Particularly striking in the region is the white stone used to construct walls, houses, farmyards and monuments. The malleability of this kind of stone has lent itself to the beautiful sculpture which can be seen on the façsdes of its monuments.

Angoulême is the capital city of the Charente, perched high on a promontory. Its quaint old town has pedestrian passages with boutiques and cafés that give onto cobbled streets. Once an important centre for the making of paper, it has now become famous for its annual international comic-strip festival. Interesting features are its comic book and graphic art museum below the old town, as well as its wall art to be found decorating the sides of various buildings of the town.

By visiting Baron Otard’s Cognac distillery, one also visits the château and birthplace, in 1494, of the French King, François I. A guide will conduct you through its vaulted cellars and enumerate the various stages in the production of cognac, ending the visit with a tasting session of a few drops of the golden liquid.

Below the castle flows the River Charente, and a little further along its banks, stands Cognac’s mediaeval gate, with its adjoining towers, once part of the fortified entrance into the town from the old port. In the Middle Ages, Cognac was an important centre for the production and transport of salt, an element as cherished as gold in times gone past, when it was used to preserve food throughout harsh winters. However, the decline of this trade and the arrival of new methods has evolved into Cognac becoming the seat of various well-known cognac distilleries.

The Château de la Rochefoucauld, quite small by some standards, has been in the possession of the Rochefoucauld family since the tenth century and has been added to little by little over the ages. It now has a splendid Renaissance courtyard as well as a library housing various early books of the works of its illustrious representatives. At the bottom of the castle drive, a small shop makes its own chocolate specialties. Next door is the Restaurant du Château, built on a pleasant site overlooking the River Tardoire. (La Rochefoucauld can be reached by the local TER SNCF train.)

One can also visit the Charente’s vineyards and taste its wines or, if you stay longer, enjoy the villages fêtes: those in April celebrating the sprouting of the first garlic cloves; on June 21st, the music festival held throughout the country in towns and villages alike; and, of course, on July 14th, Bastille Day. Later in the year, buy a bottle of the must of wine, (le moût du vin) ingredient in the first step of wine-making, or drink a glass of Pineau de Charente as an apéritif before reserving a table in a good restaurant, such as that of the Auberge du Chevel Blanc at Luxé.

Anne Pawle, expatriate and world traveler, at the age of 24, left the BBC Drama Department in London to work as an au pair for a French family in the Haute Savoie. She arrived in Paris with her husband in May, 1968, to stay on a friends boat moored on the Seine outside Paris. The May 1968 mini-revolution, a protest of general strikes bringing the country to a virtual standstill, kept them there. Opposite the boat lived a lady who encouraged Anne to come with her to work for an international organization in Paris. She worked for the organization for 30 years, and upon retirement has created a bilingual book of text and drawings called Leisure and Cultural Offerings in Paris, which is available from the publishers Mot-Tech.

You may also enjoy A Woman’s Paris® blog, The Stones of Carnac, by award-winning travel writer and photographer, Catherine Watson. Catherine’s career has taken her around the world three times, to all seven continents and into 115 countries. Writing about the giant stones that linger at this prehistoric site in northwestern France. Giant stones that march in rows across the French landscape, shouldering their way over rises, past houses, through farm fields – a granite army, 3,000 strong.

French Impressions: Anne Pawle’s arrival in Paris during the May 1968 mini-revolution. Anne Pawle, expatriate and world traveler, writing on leaving the land of her birth, together with her husband, to build a life in France.

French White Wines: Sauternes, by Barbara Redmond with Jo-Ann Ross, French Wine Scholar and Certified Specialist of Wine, who share their conversation about which French white wines to pair with foie gras during lunch at a café outside of Boston. Including Jo-Ann’s French white wine selections for French Sauternes Wines: expensive, less expensive, and something different.

A Fairy-tale Weekend in the French Countryside, by Abby Rodgers who writes: “Cars rolled in, guests suited up in white, delicious cuisine, divine choux pastry tower, sparklers, dancing till dawn…”

1 thought on “Cognac, castles, and courtyards in the southwest of France” 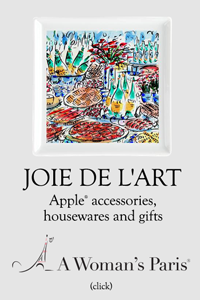