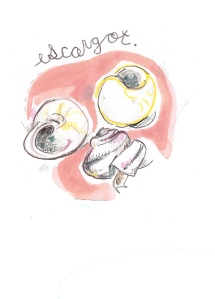 I started taking French language classes at the age of 13 and immediately learned the differences in French eating habits to that of Americans. Not only do the French have distinct table manners, but their selection and appetite for food is completely different. People eat gastropods (snails) and amphibians (frogs)? Well, I learned, the French do, and their ability to turn a completely unappetizing plate into a life-changing experience deserves a bit more recognition.

Not all the French enjoy a plate of steaming escargot. There have been many times when a French person was shocked by my love of escargot, as even they did not enjoy the dish! However, if you take a look into French history, you’ll learn that snail shells have been found in archeological digs, proving the French have been eating snails for thousands of years. Today the average snail served at a restaurant is a common garden snail, though many varieties can be discovered throughout the country.

The first time I tasted escargot was when I was studying in Paris in the spring of 2010. I had been there for about two and half months before my relatives living in Holland came for a visit. Having been to Paris before, they insisted on visiting “Paris’ oldest restaurant” called La Petite Chaise. This decently sized restaurant is located in the 7th arrondissement and offers a full 3-course menu.

After much discussion with and bullying by my cousins, I was convinced to order the escargot as my starter course. Anticipation and nervousness passed and soon my plate of steaming, hot escargot arrived. Much to my surprise, the escargots had no shells and were placed into individual basins of butter and garlic sauce. A little disappointed a first, I thought cracking open a shell would be a great addition to this first culinary experience. However I think this was for the best, realizing I would probably be reenacting the scene from the film Pretty Woman, when Julia Roberts sends the snail flying into the air.

I picked up my small two-pronged fork and pierced my first snail. Still unable to fathom that I was about to eat a slimy snail, I popped the little piece into my mouth. I was overwhelmed by the taste of butter, garlic, and herbs. What a warm and delightful flavor! Once you’ve gotten over the initial chewiness of the snail in all the tastes, this dish is a life-changing experience.

Don’t judge a snail by its shell. If you allow yourself a little adventure, you may reevaluate your perception of French delicacies and realize that the French should be revered for their ability to turn a garden snail into a culinary masterpiece!

1. Preheat grill until quite hot.

3. Measure about 2 cups of rock salt

4. Divide half the butter amongst the snail shells. Stuff 1 snail into each shell and top snails with remaining butter.

5. Spread the salt on a shallow baking dish and top with snail shells, butter side up.

6. Grill snails until butter is melted and sizzling, 4 to 6 minutes. Serve immediately.

Alyssa Glawe has recently returned from her position as an English assistant teacher, working for the Teaching Assistant Program in France (TAPIF). Her teaching placement was in Grenoble, France where she worked at two primary schools, teaching French children from the ages of 6 to 11. She received her B.A. in Communications/Journalism and French Language, but it was when she interned at the Alliance Française de Minneapolis/St. Paul, where she fell in love with French culture and language.

You may also enjoy A Woman’s Paris® post, Smell and Taste, Sensation and Pleasure, by French writer Laurence Haxaire who explains the “smart” education of the French child who is taught to recognize and describe the flavours, the feeling of taste, and most importantly, why they liked it or disliked it. Her introduction to the world of flavour is all about sensations and pleasure. She urges to “tell what you feel.”

Foie Gras – Just Because! by French writer Laurence Haxaire who writes, in France, even if foie gras is the star of holiday dinners at the end of the year, it is a traditional dish all year long. There are thousands of ways to serve foie gras; as hors d’oeuvre, or entrée. Recipe included for La Terrine de Foie Gras aux Pommes d’Elké (Foie Gras with apples), and Foie Gras à la Vapeur (Foie Gras marinated in salt, pepper and cognac, and steamed), and Foie Gras Poêllé (Foie Gras sautéed with a bit of sweet white wine).

French Onion Soup – a Paris meal to remember, by Michelle Hum who recalls the aroma of sweet, caramelized onions, dry wine, and rich broth carried with the steam rising from her bowl. With the first taste – serendipity. Recipe included for Julia Child’s Soupe à l’oignon (French onion soup), from her cookbook, The Way to Cook.

Foods of France: Infinite Flavours, by Canadian writer Philippa Campsie who delights in the unending variety of flavours available in Paris, from yogurt to jams to ice creams to spices. She shares her discovery of ginger mustard, violet-scented sugar, and saffron honey.

5 thoughts on “Escargot. Don’t judge a snail by its shell.”