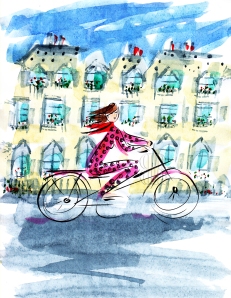 “In an old house in Paris that was covered in vines, lived twelve little girls in two straight lines…” Ludwig Bemelmans’ simple rhymes and charming imagery lulled me to sleep as a young girl. Now, as a teacher, I appreciate the Madeline books doubly; for their creative rhyme and inclusion of unlikely vocabulary, and for their whimsical ability to transport children to a different time and place. But mainly, I love Madeline the child – brave, as the books reiterate; kind, in her befriending of the Spanish Ambassador’s son, Pepito; and generally adorable: “…the smallest one was Madeline.”

In her introduction to Mad About Madeline: The Complete Tales, Anna Quindlen defines just why Bemelmans’ books stay with so many of us into adulthood. We are, mind you, “now-grown children,” and, in reading Bemelmans’ verse, may remember how good it feels to be a child. Quindlen distinguishes the Madeline books as members of an elite category, “…written for real children by people who manage, however they do it, to maintain an utterly childlike part of their minds.” And it’s true, Bemelmans obviously held onto a childlike mischievousness and imagination into his adulthood; a crack in the ceiling above his hospital bed morphed in from a rabbit to a sardine, and made it onto the pages of his first Madeline book, published in 1939.

Bemelmans’ essay, “The Isle of God,” recounts a beautiful summer spent in France with his wife, Madeleine, and two-year-old daughter, Barbara. One day on bicycle, with four lobsters in a sack on his back, Bemelmans pedaled, hands in his pockets, and naturally collided with “the Island’s only automobile” at a tricky bend in the road. He walked himself to the hospital and finally met his muse: a young girl who had just had her appendix out.

While the Madeline books bring me joy still as an adult, the elements of sadness in their stories allow me an outlet for the mourning of my own childhood. In the first book, the girls visit Hotel des Invalides. Twelve little somber faces watch a uniformed man on crutches limping through the snow, while Bemelmans writes, “They smiled at the good and frowned at the bad and sometimes they were very sad.” As a girl, I was always troubled by Madeline’s distance from her parents. The concept of a boarding school was foreign to me, and at first I assumed Madeline was an orphan. Bemelmans scatters hints indicating the existence of Madeline’s parents and those of the other girls throughout the story, but their presence is less that of characters, and more of a factor in the environment. When Madeline is hospitalized for appendicitis, her eleven sisterly companions visit her room, “Tiptoeing with solemn face, with some flowers and a vase, in they walked and then said, ‘Ahhh,’ when they saw the toys and candy and the dollhouse from Papa.” It soon becomes apparent that Miss Clavel is the girls’ real mother, albeit not biological, complete with a mother’s intuition and protective nature. In nearly every story, Miss Clavel wakes up in the middle of the night sensing that “Something is not right!” Comforted by the fact that Madeline does have family, however untraditional, we read on, delighted by Madeline’s immortal antics.

At the nonprofit bilingual preschool where I teach, we are in the midst of our annual Día del Niño celebrations. Face painting, balloons, bubble-blowing, and a parade to the park with painted banners and home-made instruments complement our celebration. The children are honored and recognized for the joy they bring to our world. Children’s Day is celebrated by many countries around the world at different times of the year. Madeline’s gig with the circus gypsies come to mind when I imagine how she would partake in this day honoring her and all the children she represents. In front of the Château de Fontainebleau, the Gypsy Mama proclaims to Madeline and Pepito, “All this, dear children, belongs to you.” Madeline demands a deserved respect for girls and children, and creates a standard for the young Parisienne to be charismatic, confident, and compassionate. The predominance of female characters in the Madeline books is significant; Miss Clavel, the Gypsy Mama, Mrs. Murphy (the girls’ jolly cook) are refreshingly self-reliant and ensure that, in some future, the twelve little girls in two straight lines surely will make Paris their own.

Natalie Ehalt is an editorial consultant for A Woman’s Paris®. She studied English with an emphasis in creative writing at the University of Iowa. In Iowa City, she participated for two years in the undergraduate Writing Fellows program and worked for three years with writers from around the world at the university’s acclaimed International Writing Program. Natalie spent her final semester in Buenos Aires and graduated Phi Beta Kappa with degrees in Spanish and English. Currently, Natalie serves as Lead Teacher at Joyce Bilingual Preschool in Minneapolis. She and her husband, an Argentine, enjoy living in Uptown with their two pet frogs, Pepe and Boss.

You may also enjoy A Woman’s Paris® post, Colette: Gigi meets Anne of Green Gables, by Philippa Campsie who contemplates French novels and their heroines, and wonders if French fiction may well be the important key to the mystery of what makes Frenchwomen the way they are. Including a recommendation of books by Louisa May Alcott, Jane Austen, L.M. Montgomery, and Colette.

I dream of Paris. Writer and educator Natalie Ehalt shares the quote from Napoléon, who wrote in 1795, “A woman, in order to know what is due her and what her power is, must live in Paris for six months.” To Natalie, Paris is the ultimate in elegance and style. It is old-fashioned, it is cobblestone, it is aprons, it is a chauffeur helping you step off the curb…

The Little Paris of Buenos Aires, by Natalie Ehalt. Natalie writes about Recoleta, a premier barrio in Buenos Aires, Argentina, this irresistible Little Paris of South America. Until the sounds of thick Argentine Spanish reveal Recoleta’s true identity, a visitor might be fooled, stepping out of an urban rowboat and into a garden of 12,000 roses.

A Fairy-tale Weekend in the French Countryside, by Abby Rodgers who writes: “Cars rolled in, guests suited up in white, delicious cuisine, divine choux pastry tower, sparklers, dancing till dawn…”