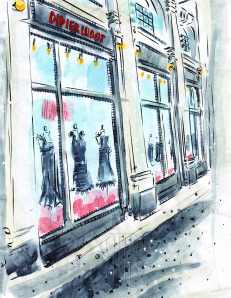 Secondhand and consignment stores offer a way to enjoy Paris fashion in a more relaxed atmosphere than the high-powered name-brand boutiques and the enormous department stores. Barbara and I have already mentioned Didier Ludot’s Palais Royal boutique in a previous blog, but there are little boutiques here and there in the centre of Paris and in the chic 16th arrondissement where one can try last season’s fripes et fringues.

Secondhand shopping took an interesting twist in the 1860s, with the Empress Eugénie, wife of Napoleon III. She was the fashion maven to end all fashion mavens, and her collaboration with the English couturier Charles Frederick Worth is generally considered to be the origin of the tradition of haute couture. He was the first male designer to dominate fashion; previously women had made women’s clothes. He was also the first to include a label in every garment on which his name was shown, like the signature of an artist.

Worth had a lot of work to do to keep Eugénie in the height of fashion. She seldom wore the same dress or the same pair of shoes twice. She was known to order two copies of the same ballgown so that during a long evening of dancing at the Tuileries Palace, she could retire and put on the second identical gown and reappear looking fresh, while other ladies were wilting. She changed her outfit at least half a dozen times a day.

She kept her clothes in a large room containing big wooden wardrobes. Her dressing room was directly underneath this storage room, and when she was ready to change or get dressed, a maid would use a speaking tube to tell another maid in the upper room to send down the clothes through a trapdoor. The clothes were placed on a mannequin, and descended from on high as a full outfit, with undergarments and accessories accompanying the gown. Since skirts were huge at the time, the system kept her dresses from creasing.

This, after all, was the age of the crinoline, a structure of thin hoops of flexible steel, held together with fabric tape – the invention of a Frenchman called Milliet, patented in 1856. The crinoline replaced the multiple petticoats that had formerly given a bell shape to a skirt. Eugénie started wearing crinolines on Worth’s advice, and hers were the biggest of all. She was sometimes called La Reine Crinoline.

Of course, even in a palace, a woman who seldom wears the same thing twice is going to have storage problems (and budget woes). Eugenie solved both problems by selling off her used clothes once a year. The clothes – dresses, shawls, hats, crinolines, even underclothes – were displayed for sale in a large room in the basement of the Tuileries. Most of the customers at this sale were women servants at the court. Whatever they didn’t buy went to secondhand dealers in the city. As for her shoes, Eugénie gave her once-worn slippers to the young girls at an orphanage she supported. She had a tiny foot and they fitted the children quite well.

All this furious spendthrift activity couldn’t last, and it didn’t. In 1870, after the disastrous Franco-Prussian war, the French threw out Napoleon III and his Empress, and declared a republic. Eugénie had to flee in the clothes she stood up in (for the record, it was a black cashmere dress, with a black hat and a waterproof cloak). For the rest of her life, she lived simply in England, doing charitable work. However, the sale of her jewels allowed her to live in comfort until her death in 1920, at the age of 94. She seemed to have a knack for getting value out of her cast-offs.